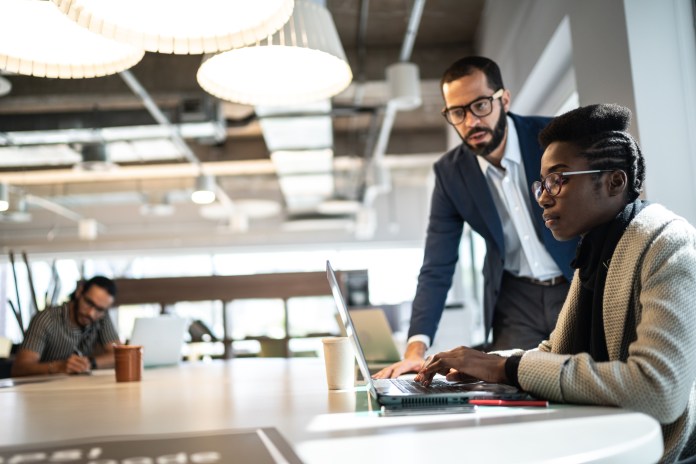 Any Black candidate, employee, or founder in tech can tell you how much anti-racism work still needs to be done in the industry. Eighty-three percent of tech executives are white, while only 7.4% of all tech employees are Black. Less than 1% of venture capital funding goes to Black startup founders. But the statistics alone aren’t enough to illustrate these issues. Even if a person of color beats the odds and gets a job in tech, they face bias within the workplace.

While working as one of the top technical engineers in an organization, I was called into a program manager’s office to fix a technical problem that had stumped everyone else. When I entered his office, the manager looked at me, immediately mistook me for the janitor, and began giving instructions for rearranging his furniture.

I had already established myself as a top technical engineer at organizations like the NSA and the Defense Intelligence Agency before taking this role. But because of my manager’s immediate, unconscious assumption based on the way I looked, he at first failed to recognize me as an expert engineer. That incident certainly didn’t define me, and it turned into a learning moment for the manager. I went on to build a cybersecurity company that was acquired last year. However, the outcome isn’t always so positive.

Much more needs to be done in the tech world to embrace anti-racism. Diversity training and good intentions can only go so far. It’s time for the industry to move past awareness-building conversations and toward real, tangible changes for Black employees, candidates, and founders. Here are a few examples of what intentional anti-racism could look like in tech.

1. Acknowledge the experiences of Black Americans

At this moment, the conversation needs to be about Black candidates, employees, and founders. Companies need to recognize the unique experiences and challenges for Black Americans, which are different than other underrepresented groups. These are the people who for centuries have not had an equal economic support system, whose stories have been erased in history and literature, and who have internalized a negative view of themselves and their abilities.

2. Be intentional about hiring Black employees

Even as a Black founder, it was difficult for me to find Black candidates for the roles I was trying to fill. Companies have to be intentional about hiring Black employees because there are far more white candidates out there right now. They must do the extra legwork. There’s a rule in the NFL called the Rooney Rule that requires teams to interview people of color for head coaching or senior operations jobs. Tech companies must establish their own Rooney Rule.

There are plenty of places to look for Black candidates. I’ve volunteered at local high schools that are predominantly Black and Latinx to teach computer science. I’ve sponsored hackathons for Black engineers and offered internships to the winners. More tech companies need to bring their career fairs to historically Black colleges to seek out candidates.

Hiring Black employees also means looking at non-traditional backgrounds. Hiring managers should look beyond education at true aptitude and skill level. Look for candidates who have technical passion projects outside of work. Platforms like GitLab and GitHub are useful here. You can see how a candidate is contributing skills to passion projects. I believe that anyone can do a job after a few months of training, and it will take any employee a few months in order to be fully productive in a role, regardless of background. Investing in new hires through training is critical. Larger companies, in particular, have a responsibility to do this because they can afford it.

It’s also important to avoid hiring for qualities like “culture fit” that can mask implicit bias. If all of your employees are white and you’re hiring for culture, you’ll likely end up passing over Black candidates or discouraging them from applying. Remind recruiters and interviewers to check their assumptions about what Black candidates are capable of or what qualities are valued in a candidate.

The work-from-home shift has had an impact on the hiring process that may put Black candidates at a disadvantage. At a time when job interviews now often require access to a computer, video conferencing software and equipment, and a high-speed internet connection, it’s important to remember that access to technology is also a privilege. Companies should make the interview process as accessible as possible.

3. Rethink how employees are compensated

It’s a privilege to be able to take a job at a startup company and hold out for stock options that may or may not pay off in the long run. Getting in the door early at a promising startup can lead to major payoffs down the line, but many Black people can’t take these risks. New companies might not be able to offer full benefits or job stability. Systemic racism means that Black Americans don’t always have families that can support them or a financial safety net to fall back on. Some need benefits and stable salaries more than stock options. Startups need to reconsider how they’re compensating teams to support different types of employees and encourage Black candidates to apply. There’s also an important opportunity for tech companies to educate Black employees about equity and stock options. They must be able to make an informed choice about what compensation is best for them without missing out on the huge potential gains of an IPO.

One of the most effective actions tech companies can take is to use their own privilege to support companies that haven’t been given the same advantages. Major tech companies should allow their engineers to donate their time and skills to helping smaller, Black-owned startups. Employees could choose companies whose values align with their own and then mentor junior employees at those companies or volunteer to help with coding. Another option is for successful tech brands to support Black founders by helping them build new businesses on their platforms and then putting them in front of customers or investors. Companies can invest resources in these businesses to fuel new ideas. This type of intentional partnership-building can extend to supplier diversity. ConnXus, for example, helps connect companies with diverse suppliers.

It’s clear that awareness of this problem is not enough. Even after years of diversity reports from tech giants like Microsoft, Facebook, Apple, and Google, those companies have not made much progress in hiring more Black employees or other people of color. The next step must be actionable and intentional. This should not be a flash-in-the-pan issue, but something that all companies do intentionally and continuously. All companies, regardless of size, have to make a real commitment that involves taking multiple steps to seek out, hire, and train Black candidates and support Black founders.

Marcus J. Carey is a veteran who has worked for the NSA and Defense Intelligence Agency and who sold his cybersecurity startup Threatcare last year and now works at ReliaQuest as an enterprise architect. He is also author of “Think In Code” and the “Tribe of Hackers” series. Follow him on Twitter @marcusjcarey.