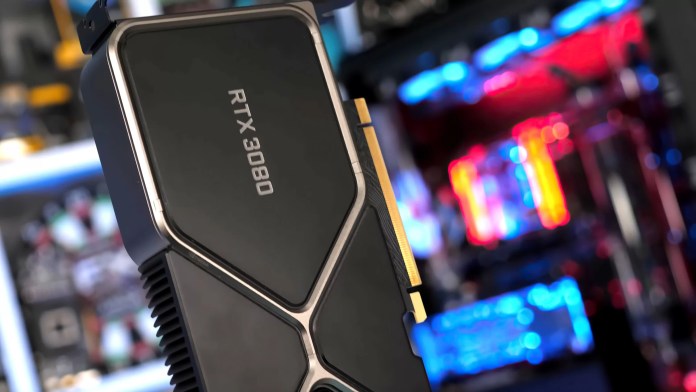 A hot potato: While we were all worried about the coronavirus causing shortages of Nvidia’s RTX 3080, the real reason you can’t get your hands on one is old-fashioned greed. The card was sold out across all online stores and most physical stores in the US within minutes of going on sale yesterday, and it seems a lot of the blame can be placed on bots used by scalpers who are now selling them on eBay for massively inflated prices, something Nvidia says it’s trying to address.

The RTX 3080 received glowing reviews once its embargo lifted—we gave it a score of 90 and praised the performance and price point. That no doubt fuelled the rush when the card went on sale yesterday, but the speed at which they disappeared was shocking.

PCMag reports that in many cases, an automated bot capable of instantly ordering dozens of RTX 3080s from Nvidia’s website was utilized. Some scalpers have been using social media to thank its creator, Bounce Alerts, a group that helps members grab high-demand products at launch so they can be resold at a much higher price. One reseller used the bot to buy 42 cards from Nvidia’s site before they ran out.

1) Not a single partner who had notifications for launch of the product sent one (that includes your own stores)
2) the nVidia shop went from Notify to sold out in 1.2 seconds
3) You didn’t work with retailers to prevent scalpers

So you want us to buy AMD Cards?

It’s estimated that Bounce Alerts’ bot alone was used by over 100 people to grab cards from Nvidia’s site.

eBay is currently flooded with RTX 3080 units, which has an MSRP of $699. Many of these are around the $2,000 mark, and numerous sellers don’t even have them in hand—they’re just confirmation of an online order with no exact shipping date. One person who apparently owns an EVGA GeForce RTX 3080 XC3 Ultra has put the starting bid at $25,000, and while there are several auctions that have passed the $10,000 mark, many of these bidders could (hopefully) have no intention of paying—a way of getting revenge on scalpers.

Nvidia responded to the situation with a statement on its website.

This morning we saw unprecedented demand for the GeForce RTX 3080 at global retailers, including the NVIDIA online store. At 6 a.m. pacific we attempted to push the NVIDIA store live. Despite preparation, the NVIDIA store was inundated with traffic and encountered an error. We were able to resolve the issues and sales began registering normally.

To stop bots and scalpers on the NVIDIA store, we’re doing everything humanly possible, including manually reviewing orders, to get these cards in the hands of legitimate customers.

Over 50 major global retailers had inventory at 6 a.m. pacific. Our NVIDIA team and partners are shipping more RTX 3080 cards every day to retailers.

We apologize to our customers for this morning’s experience.

It seems the same problems are plaguing the PlayStation 5. The console was marked as sold out moments after appearing online, and hundreds of confirmed pre-orders are now selling on eBay for several thousand dollars.