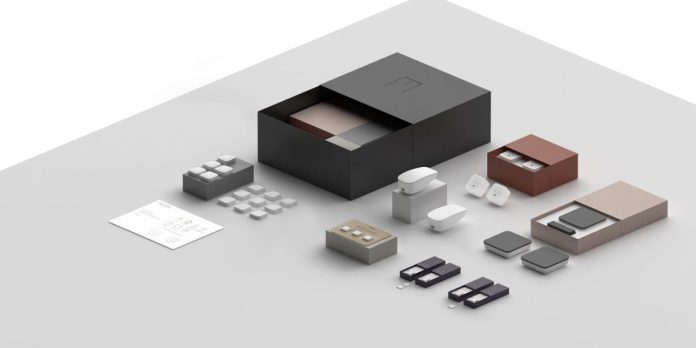 That’s where Mesa comes in. The plug-and-play kit is designed to intelligently cut heating and cooling usage, as well as “plug loads,” or the electricity consumed when appliances are plugged in. Mesa kits entitle access to a support line, installation guides based on individual floorplans, and a range of devices — including smart thermostats, data hubs, and sensors with five-year battery lives (sourced from startup Disruptive Technologies) that adhere to surfaces and plug into wall outlets. They are compatible with spaces that use thermostats to directly control heating or cooling.

Sidewalk says it had been working on Mesa since before the pandemic, but that the health crisis raises the need for energy-efficiency technologies and systems that can adapt to changing work patterns (like remote work). The company points to studies showing that simple usage changes can generate substantial savings. For example, changing the temperature setting for a 5,500-square-foot office space in New York City from 73 to 75 degrees Fahrenheit during warmer months can reduce cooling energy consumption by 24%, based on the commercial buildings model published by the U.S. Department of Energy. 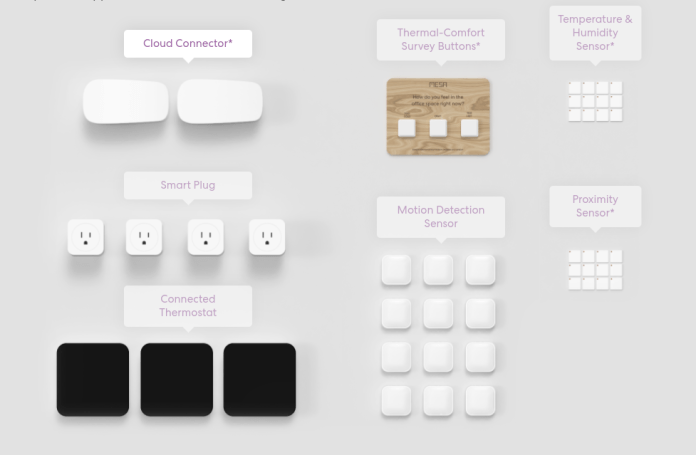 Mesa connects via existing Wi-Fi networks and gathers “non-personal” information about office environments, like interior temperature and occupancy, according to Sidewalk. The system then manages heating and cooling, turns off unused power outlets, and sends maintenance alerts to building operators, even improving ventilation if spaces need fresh air.

Sidewalk says Mesa can incorporate external data, such as weather patterns, motion patterns, humidity, interior temperature, and office data, to avoid over-cooling or over-heating spaces based on fixed set points. For example, Mesa can adjust interior systems on unseasonably warm winter days when a preset, non-automated system might leave the heat blasting. It also understands the time needed to cool or heat a space so it won’t start the cooling or heating process too early.

To preserve privacy, Mesa does not use cameras and limits the occupancy data it collects by default to whether spaces are occupied or empty (as opposed to occupancy counts), Sidewalk says. Moreover, the digital devices in the Mesa kit aren’t capable of identifying a person, Sidewalk claims, nor will they be in the future.

Some would-be customers might be reluctant to take Sidewalk at its word when it comes to privacy. In its unsuccessful bid to build a smart community in Toronto’s Quayside neighborhood, the company failed to commit to promises it would ensure all sensor data was de-identified at the point of data collection. In 2018, BlackBerry maker Research in Motion cofounder Jim Balsillie called the project “a colonizing experiment in surveillance capitalism attempting to bulldoze important urban, civic, and political issues.” 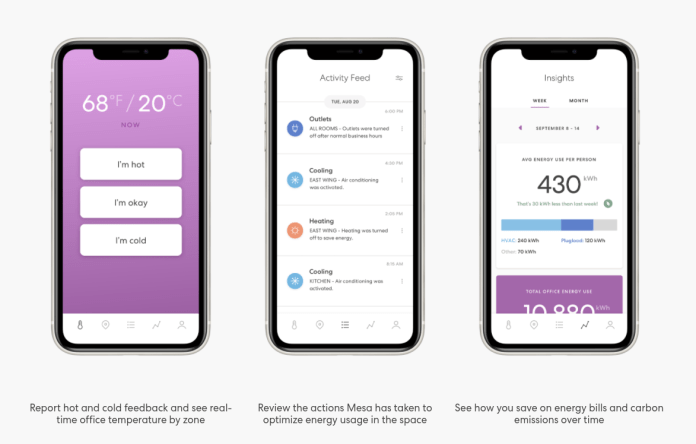 Perhaps in an effort to allay fears, Sidewalk revealed that it has already piloted Mesa in two undisclosed office buildings in NYC without incident. The company plans to engage more commercial landlords and tenants in the coming months ahead of the launch of products tailored to “sustainability” and “affordability” challenges, with the goal of helping commercial buildings reduce energy costs by up to 20%.

Utility-optimizing AI is a burgeoning business, with plenty of competition. There’s BrainBox and Aquicore, whose algorithms make fine-grained adjustments to HVAC systems on the fly. Augury, a startup developing sensors that attach to machines and record data that’s then analyzed in the cloud, works with service companies to diagnose and optimize systems like industrial HVAC. GE Digital’s Predix and startup Petasense offer similar Wi-Fi-enabled, cloud- and AI-driven monitoring sensors. And Carbon Relay boasts a product that leverages sensor data to make predictions about datacenters’ cooling usage.