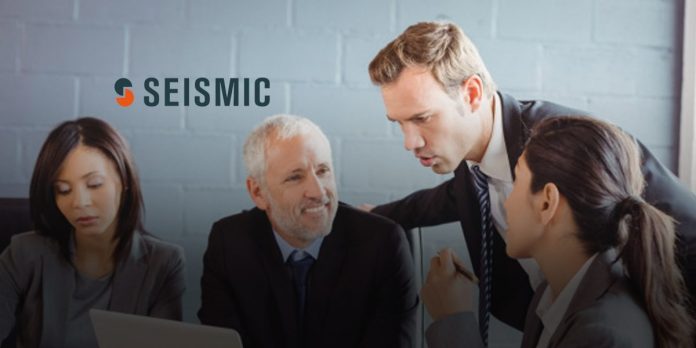 Seismic, a startup developing a sales enablement and market orchestration platform, today raised $92 million at a valuation of $1.6 billion. (That’s up from a $1 billion valuation in December 2018.) A company spokesperson tells VentureBeat that the capital will be put toward international growth, mergers and acquisitions, and product R&D.

Sales enablement is a market in the midst of healthy and sustained growth. The percent of organizations with a dedicated sales enablement person, program, or function nearly doubled between 2016 and 2018, according to CSO Insights. And in September 2018, Forrester Research reported that 54% of companies have or are in the process of implementing a sales enablement technology, with an additional 19% planning to do so or considering doing so in the next 12 to 18 months.

Former Dell EMC vice president Doug Winter cofounded Seismic in 2010 with Ed Calnan, Fred Xie, Marc Romano, and Nasser Barghouti. The company’s platform, which powered over 2.5 million sales interactions in 2018, leverages AI to automate parts of the sales and marketing cycle and personalize documents for sales reps. It gleans useful info from sales content, like how much revenue assets are producing and the amount of time customers spend viewing them. And it makes those insights actionable by revealing the impact of messaging and materials — recommending, for example, that the most popular materials be used as a sales funnel.

Seismic’s unified content management system supports approval workflow, version control, content expiration, permissions management, live data components, and batch updates, to name a few of its capabilities. It also enables salespeople and managers to build documents from existing data and content — content that updates automatically in the background to reflect changes. Tweaks to services pricing would appear across all documents with a pricing information component, for example, and changes to a company logo or product name would update all files containing said branding.

Seismic claims to have over 600 customers including IBM, Cisco, American Express, and Wayfair, and the company’s workforce stands at over 900 employees across 14 offices, after acquiring the Savo Group and New York-based Percolate. (As of last December, Seismic had 600 customers.) But it’s been a roller coaster for Seismic lately in spite of the impressive growth; in January, it was among the companies mega-investor Softbank dumped ahead of pandemic-related economic headwinds.

Still, it appears to be business as usual from the outside looking in. After surpassing $100 million in revenue last January, Seismic opened new offices in France, Australia, and Germany to support its existing U.K. presence. The company recently launched LiveContent, a feature that allows organizations to build and provide digital experiences, alongside “microapps” that deliver evergreen content like brochures, pitch decks, and interactive visuals. And during the first half of 2020, Seismic says it saw a 148% increase in active users over the prior-year period and a net retention rate of nearly 120%.

Presented by SingleStore Technology can be complicated — or it can simplify things, make them faster and more efficient. Just consider how much easier the smartphone...
Read more
Load more