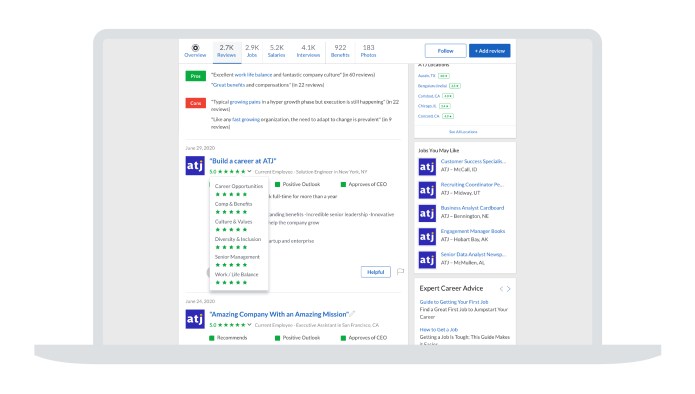 Glassdoor is now letting employees write diversity and inclusion reviews for companies in a way to make employers more transparent. Employees will be able to rate and review companies on how they treat employees based on race, ethnicity, gender identity, sexual orientation, and other underrepresented groups.

In a poll, Mill Valley, California-based Glassdoor, which has ratings on more than a million companies, found that job seekers and employees trust the employees already working at a company when it comes to understanding the state of diversity and inclusion at a company. Glassdoor said that 76% of job seekers and employees today report that a diverse workforce is an important factor when evaluating companies and job offers. The company said these new features are part of its public commitment to leveraging its product and resources to help achieve equity in and out of the workplace.

The Glassdoor survey was conducted by The Harris Poll. It found that job seekers and employees report that disparities still exist within companies with respect to experiences with and perceptions of diversity, equity, and inclusion in the workplace. The company undertook the effort after this year’s racial unrest.

“In recent months, many of Glassdoor’s more than 50 million users have been telling us they want more insight into what the current state of diversity & inclusion is like at a company,” Scott Dobroski, spokesman for Glassdoor, wrote in an email. “Then, after the murder of George Floyd, we saw employee reviews talking about diversity, racial justice, and related topics rise by 63% on Glassdoor.”

Because of this, the company knew people wanted more data. “We believe we have a responsibility as a platform and as an employer to help drive equity in society, and we can help to create more equitable workplaces,” Dobroski said. 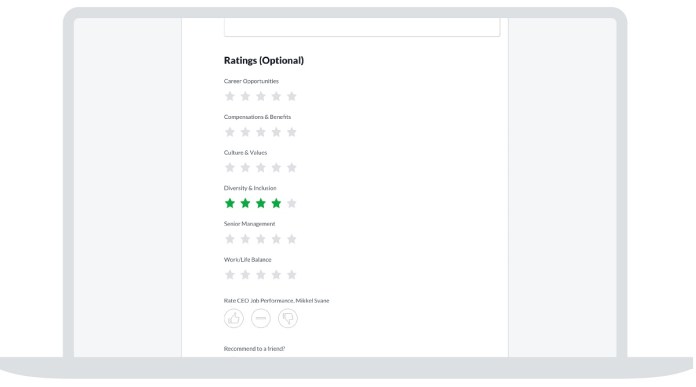 This rating is Glassdoor’s sixth and newest workplace factor that allows employees to rate how satisfied they are with diversity and inclusion at their current or former company, based on a five-point scale. The rating will appear alongside the five existing workplace factor ratings.

While the product was in stealth mode, employees across 12 companies started to rate their satisfaction with their company’s Diversity & Inclusion (D&I). So far, Salesforce has the highest D&I rating among this group according to its employees, with a 4.6 rating. Other companies currently rated in terms of their employee satisfaction with D&I include: Google: 4.4, Accenture: 4.2, Amazon: 4.1, Apple: 4.0, Deloitte: 4.0, Facebook: 4.2, McDonald’s: 3.7, Starbucks: 4.1, Target: 4.1, Uber: 3.6, and Walmart: 3.7.

More than 4,000 employees have rated their companies so far. 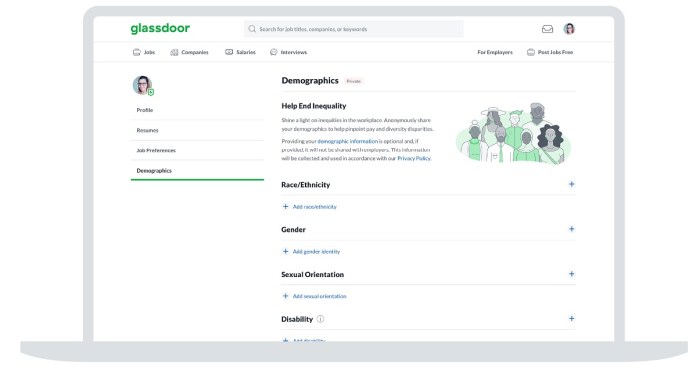 Above: Employees have the option of describing their demographic info on Glassdoor.

Glassdoor now enables U.S.-based employees and job seekers to voluntarily and anonymously share their demographic information to help others determine whether a company is actually delivering on its diversity and inclusion commitments.

Glassdoor users can now also provide information regarding their race and ethnicity, gender identity, sexual orientation, disability status, parental status, and more, all of which can be shared anonymously through their Glassdoor user profile.

Glassdoor will soon display company ratings, workplace factor ratings, salary reports and more, broken out by specific groups at specific companies. This information will equip employers with further data and insights to create and sustain more equitable workplaces. Sharing demographic information with Glassdoor will be optional and displayed anonymously.

Glassdoor is also debuting a new Company FAQ resource, offering a list of the most popular questions job seekers ask about companies, including a section dedicated to diversity and inclusion. Responses to the FAQs are taken from the employee reviews appearing on Glassdoor. The tool provides easier access to relevant reviews about D&I at specific companies.