Following the September “Time Flies” media event for new Apple Watch and iPad models, Apple today announced an October event called “Hi, Speed” that will focus primarily on new iPhones — the most popular products and biggest revenue generators from the world’s largest tech company. The event will kick off at 10 a.m. Pacific Time on October 13, and once again will use a virtual format with footage streamed from Apple’s headquarters in Cupertino, California to viewers online.

The stakes are atypically high for Apple this year, as the latest iPhones will be Apple’s first to embrace 5G cellular technology, nearly two years after rivals such as Samsung showed and started to release the earliest 5G devices. During that time, 5G networks have successfully launched all across the world, generally with superior performance outside the uneven United States. Some 5G towers are already delivering transformative-class peak download speeds in the 1-2Gbps range at certain locations, while others are barely faster than prior-generation 4G. U.S. carriers have been working feverishly to improve their 5G networks ahead of the new iPhones’ launch, as iPhones have historically driven demand for next-generation cellular network performance, rather than the other way around.

Since users now keep smartphones for three years on average, analysts believe that the first 5G iPhones could spark a “supercycle” of upgrades by enterprises and end users looking to future-proof their communications gear. However, Apple is expected to start the iPhone 12 family’s pricing at $649 for the smallest “iPhone 12 mini,” which is significantly more than 5G Android phones with larger screens and higher storage capacities. Apple is also expected to omit high-speed millimeter wave 5G capabilities from at least half of the new models, reserving that feature for Pro versions priced at $999 or more, while competing Android phones with mmWave are now available for $599. 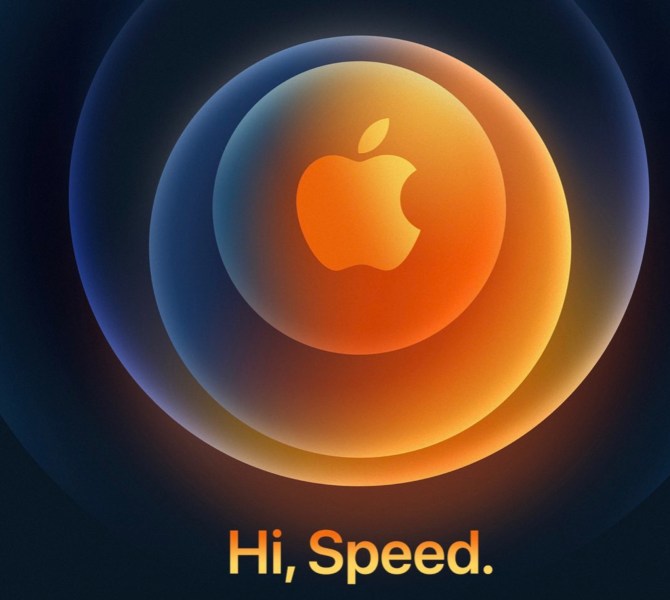 While Apple’s event will likely mention 5G as only a portion of the iPhones’ appeal — they will also feature new A14 Bionic processors and lidar depth sensors for augmented reality and photo apps — the cellular upgrade alone was responsible for years of development turmoil. Apple originally planned to use Intel’s 5G modems, but after development challenges, Intel sold its smartphone modem business to Apple, which settled lawsuits with Qualcomm and switched to Snapdragon-series 5G modems. The event’s “Hi, Speed” tagline suggests that Apple won’t back down from emphasizing the iPhones’ peak cellular potential, regardless of the state of U.S. and global 5G networks on launch day.

During the 2020 Worldwide Developers Conference in June, Apple confirmed that it will also transition Mac computers away from Intel chips, but that won’t be the focus of October’s event; initial Apple Silicon-powered Macs are currently expected to have their own virtual event in November. Traditionally, Apple announced new iPhone and Apple Watch models in September, followed by new iPads and Macs in October, but COVID-19-related challenges delayed the annual big iPhone launch event by several weeks this year, creating an opportunity for three smaller showcases.

Based on Apple’s release timing after prior media events, preorders for at least some of the new iPhones will likely commence on October 16, with early deliveries one week later, on October 23, though reported manufacturing and supply constraints may lead to staggered or delayed launches for iPhone 12 Pro models in some territories. Apple may also use the October event to show “Apple Tag” or “AirTag” location tracking accessories based on high-precision ultra wideband sensing technology, audio accessories such as over-the-ear headphones, and/or new wireless charging hardware.