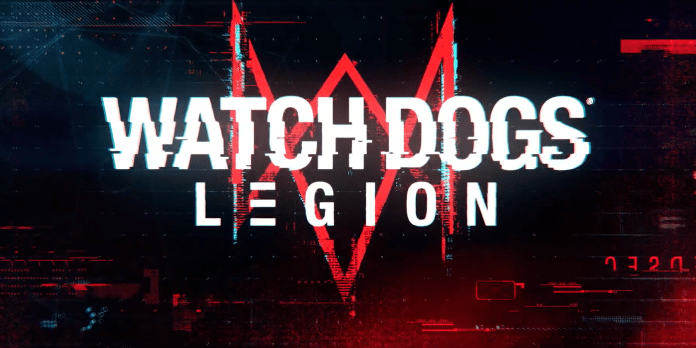 Ubisoft showed me a new slice of gameplay for Watch Dogs: Legion, the third in the popular series that pits hackers against the authorities in modern cities. The game debuts October 29 on Xbox One, PlayStation 4, PC, and Stadia. It will also hit the Xbox Series X on November 10 and PlayStation 5 in November 12.

The new action-adventure game is set in a near-future London, where your job is to expose crimes and corruption in the surveillance state. The game arrives at a tough time for the French video game publisher, which spent a lot of the summer dealing with accusations of sexual impropriety by key executives.

I played the beginning in an earlier preview. You start in London as a DedSec operative Dalton Wolfe, a hacking coalition that infiltrates the city’s electronic infrastructure and tries to overturn the government’s worst excesses. You infiltrate Parliament in hopes of disarming a bomb. But the mission is a setup, the bombs go off, and Wolfe is killed along with many others. The law enforcement faction, Albion, moves into the power vacuum to take over the city under martial law and hunt down DedSec. (Here’s our interview with the game’s lead producer).

Sabine, DedSec’s mission coordinator, escapes and tells you that you have to recruit a whole new set of DedSec followers. This is where you realize that there is no main character. The game has a central villain in Nigel Cass, the leader of Albion and the man who wants to create a complete surveillance state with a private military. But as the player, you can be anyone that you recruit in the city of London as your playable character for the DedSec hacking group. You can keep on recruiting as you like, but if you lose a character, that person is permanently dead.

Ubisoft’s game director, Clint Hocking, said in past events that the idea is to empower the ordinary citizen to rise up and fight for freedom. But you can recruit everyone from an ornery grandmother to a martial arts expert to take on your missions. 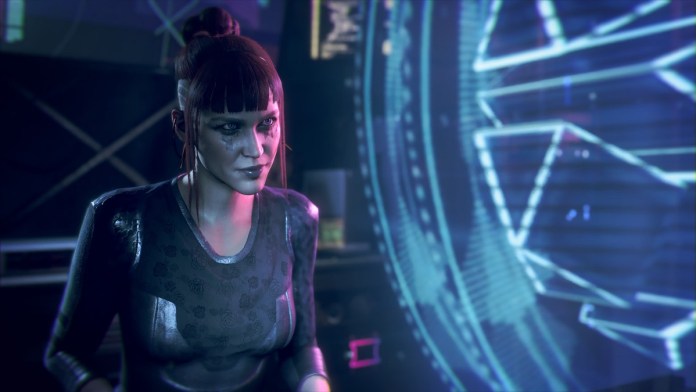 My extended preview picked up at this point. I played for a couple of hours via Parsec, a cloud gaming service where the game runs in a datacenter and streams the results to my screen in 1080p resolution. Ubisoft captured the imagery at the datacenter and sent it to me. You can see an edited 20-minute section of the gameplay in the embedded video.

DedSec has been all but hunted down. I’ve been recruited by Sabine into the Resistance, and my job is to rebuild DedSec. I can go pretty much anywhere in the open world of London. I can hack just about anything and break into high-security buildings using a variety of tricks. I can tap into and hijack armed combat drones, stealthy spider-bots, covertly, and wear my augmented reality cloak.

I can recruit anybody I pass by on the street, using my phone to profile them. I can see if they’re sympathetic to DedSec’s cause. If they are, I can easily recruit them. If they aren’t, then I can do some kind of favor for them, like rescuing a friend who has been locked up by the police, to get them to change their minds. I can chat with them, and my AI assistant, Bagley, can give me advice about how to bring them over to DedSec.

You can also reduce Albion’s presence in the boroughs of the city by inspiring the residents to rise up. You can do this by finding and recruiting key people in the boroughs to help with your cause. Once you do this, you can recruit people in that borough more easily. You can choose which one of your characters will be the hero. That’s very different from the first two games, where there were main characters who handled most of the tasks in the main stories. Aiden Pearce, the hero of the first game, will be back in the downloadable content (DLC) for Watch Dogs: Legion, but he won’t be playable in the main game.

You have to do all of this in stealth mode. You can fight and engage in parkour acrobatics to escape the police, but if you take them on head-on, they will eventually close in on you and kill you. As mentioned, once your character is taken out, that character is gone, unless the character is wounded and can come back at a later time. 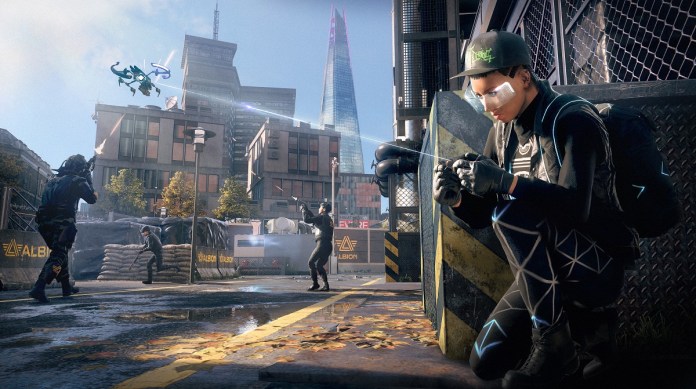 Above: You can recruit drone experts to help you in Watch Dogs: Legion.

My preview picked up after the beginning of the game when DedSec is still trying to get a handle on who set off the bombs. My job was to go into one of the bomb sites and find clues that could help me reconstruct what happened. The bomb site was near a bridge on the Thames, and it was roped off. Just outside of it was a memorial with flowers for all the lives that were lost that day.

There were a bunch of construction crews and guards at the site, as well as surveillance drones and cameras. It wasn’t easy to get in. Lead producer Sean Crooks told me that it’s likely you’ll run into people such as construction workers outside of a construction site. You can recruit them and more easily infiltrate into the construction site. But I didn’t see anybody who fit the bill. The first two times I tried to get into the compound, I was discovered and wounded. My third and last recruit had to survive.

This time, I stayed outside and hacked some of the security drones. I could daisy chain from one to another to get deeper into the site. I was finally able to see a target underground where I could pick up some clues. Then I hijacked one of the big cargo drones, flew it to my position, and hopped aboard. I flew it to the ramp that could take me underground and hopped out. There was a guard in the way. I armed a trap, but he didn’t walk into it. I hijacked more security drones, but that only alerted him to something awry. He started hunting me. I finally was able to distract him and then knock him out.

Then I proceeded to the underground spot where the clue was. Using augmented reality, I was able to reconstruct a scene that happened as the bomb was being planted. It turns out that members of a clan, led by a person named Mary Kelly, was responsible. I had to hijack a spider bot to confirm exactly what happened. Then I was able to complete the AR reconstruction and finish the mission. I hopped aboard the cargo drone and made my escape from the compound. 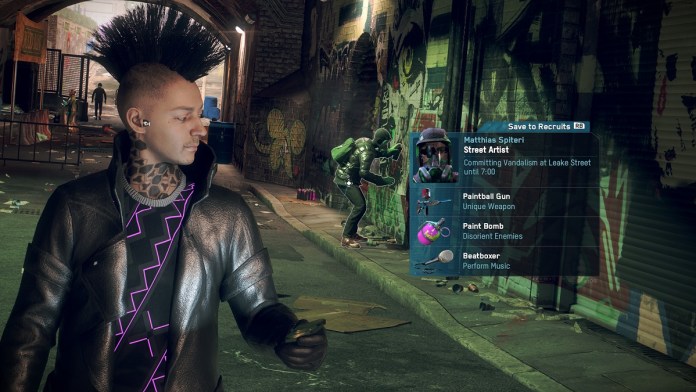 Above: Profiling a street artist in Watch Dogs: Legion.

Next, I needed to locate some evidence inside a police station. I was outside the station and noticed there were a couple of maintenance workers already inside. I inspected one of them and found that he was sympathetic to DedSec, so I was able to recruit him on the spot.

I then hijacked a camera and disabled the alarm for the entry to the station. The guard noticed and turned it on again. So I distracted the guard and gave it another try. Then I moved inside, but a police officer noticed me. I had to take her out with my wrench, and fortunately, no one else noticed. I got into the garage area and had to evade yet another guard and take another out. Once again, the guard didn’t alert others.

I lucked out again and got inside, where I spotted the evidence in the form of a spider bot that had been picked up from a bomb site. I zapped the technician with an electric trap and then took over the spider bot. It was damaged, and I had to move it around the lab, getting it up into building’s air vents. After lots of jumping and failing and jumping again, I got it out. I had to club a couple of more police officers. It was an inelegant solution to resort to such violence. But I was able to proceed to my next mission. 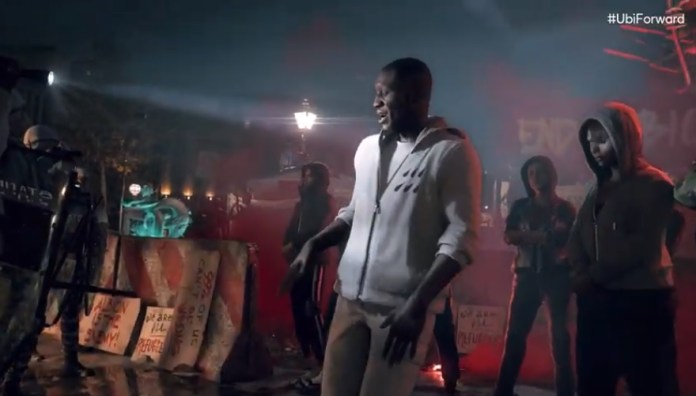 Above: Stormzy makes an appearance in Watch Dogs: Legion.

Next, I came upon a police investigator who had discovered an evil plot involving Clan Kelly, which had a role in the bombing. She had tracked down a bunch of evidence on Clan Kelly but then disappeared. My job was to find out what happened.

That led me to a big stadium with multiple clues to run down. I did that, and it directed me to a warehouse where Clan Kelly had gathered. I tried to go in undetected, but a thug started chasing me right away. I had to get in via hijacked cameras and find a way to stun some guards with electric traps and then make my way in.

I finally got in and was able to find the missing investigator and rescue her, just as we were both about to be cut up for body parts and sold on the black market. 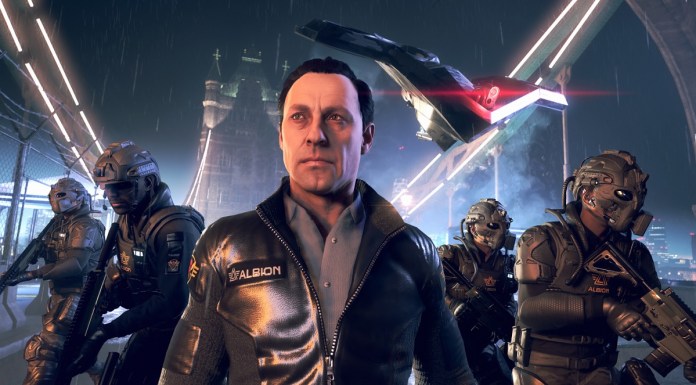 I enjoyed my time wandering around the city of London. I wish the story were more directed with a main character, but I also appreciated the freedom of being able to recruit anyone and grow attached to those recruits. I liked being able to fit the character to the mission, like getting a police officer to do an undercover mission inside a police area. I think that if I could succeed in most of my missions without losing a character, I could really become emotionally attached to the character.

This game is only so good as the missions. If they’re all as intriguing as the ones that I played, then that will keep me interested in playing one more mission. I hope it’s going to be good, and I’m willing to give the game a try.