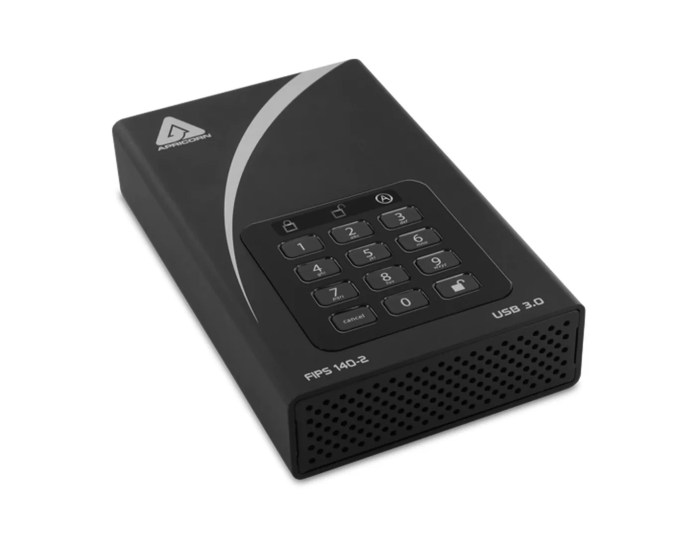 Why it matters: Apricorn is targeting its latest – and largest – hard disk drive at organizations working with sensitive data. With a USB 3.2 interface, the Aegis Padlock DT FIPS won’t be breaking any speed records with a max 5 Gbps (625 MB/s) data transfer rate, but it will protect that data with FIPS 140-2 level 2 security that certifies it for use within government, medical and financial sectors. It’s available in 9 storage capacities that start from the $229 2TB model and goes up to 18TB, which costs $1,199.

Like its mouthful name, Apricorn’s new Aegis Padlock DT FIPS encrypted desktop drive is designed to be very tough on hackers, thanks to a host of security features built inside and out. On the surface, the Aegis Padlock is essentially an HDD (from an unnamed vendor) inside an enclosure, which is then protected with hardware-based 256-bit AES XTS encryption and an onboard keypad PIN for authentication.

Apricorn says that the drive is FIPS 140-2 compliant and uses the company’s own locked down AegisWare firmware to make it ‘immune’ against malware, while a hardened epoxy layer on the drive’s internal components protects it from physical tampering.

The drive features a separate Admin and User mode that allows for setting up to four User PINs with one independent Admin. When connected, it remains invisible to the host and can only be unlocked by typing the PIN with the onboard keypad, protecting it from any keyloggers/spying tools that might be listening for keyboard strokes. The buttons on the keypad, meanwhile, feature a wear-resistant polymer coating so as not to reveal the most commonly used ones.

While in User mode, the drive offers limited functions (read/write data, lock/unlock drive) and can also be set to lock after a certain period of inactivity. It also has a “Brute Force Hack Defense Mechanism” against physical attacks that causes the drive to delete its own encryption key after a consecutive number of incorrect PIN entries (that are configurable), thereby making it impossible to decrypt stored data.

As a last line of defense, Apricorn notes that users can activate a “Self-Destruct” PIN that performs a complete crypto-erase on the drive and then becomes the new access PIN for it. The company also provides a 12V AC adapter for powering the drive and warns against using alternatives.

The Aegis Padlock DT FIPS is compatible with Windows, Linux and Mac PCs and is offered with a 1-year limited warranty. It’s available to buy in a variety of capacities, including a whopping 18TB version that costs $1,199, making it the largest and possibly the most secure external HDD on sale right now.