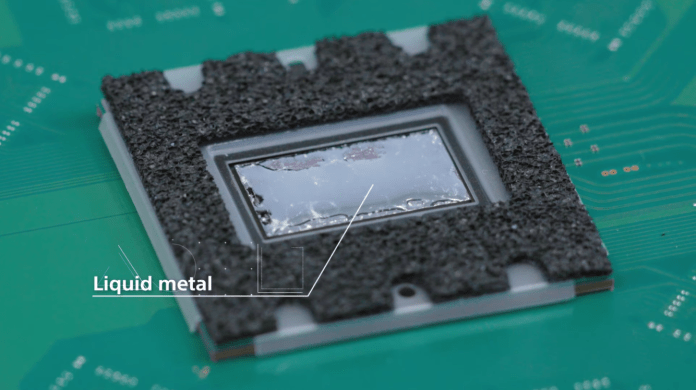 PlayStation 5 is going to ship to consumers with liquid metal between its AMD system-on-a-chip and its heatsink. This is something that was unthinkable in previous consoles for a number of reasons. But Sony engineers have tackled the challenges, and this could enable the PS5 to expel heat much faster than its predecessors.

Heat management is a huge part of engineering any electronics system. And Sony obviously emphasized the importance of cooling during the PS5’s design phase. This might result in the PS5 running cooler and quieter. But more important, it should enable the system to run demanding games without crashing.

Let’s break down what this all means first.

PlayStation 5’s liquid metal is necessary due to extreme temperatures

Processors generate heat. That is an inevitable byproduct of the way they work. And modern CPUs and GPUs can produce a lot of heat without sacrificing stability and performance. But if temperatures around a processor get too high, it can begin to cause errors due to misfires in the transistors. That’s where cooling comes in.

Cooling usually works by putting a conductive material onto the chip to route the heat outside of the system. The important part of this system is called the heatsink. But to get the most out of that routing, you want to ensure as strong a connection between the chip and the heatsink as possible. And that’s the job of the thermal interface material (TIM).

Typically, systems use a paste-style TIM, but that isn’t good enough for the PS5. During his teardown of the PS5, Sony engineering vice president Yasuhiro Ootori explained why.

“The PS5’s SoC is a small die running at a very high clock rate,” Ootori said. “This led to a very high thermal density in the silicon die, which required us to significantly increase the performance of the thermal conductor, also known as the TIM, that sits between the SoC and the heatsink.”

That need led Sony to go with liquid metal.

Why doesn’t Sony or Microsoft always use liquid metal?

It’s difficult to apply because it’s electronically conductive. The risk is that it could get on other parts in a system and cause them to short out or malfunction. Liquid metal also moves around a lot, which makes it difficult to ship to consumers. Finally, previous liquid metal alloys used for this application weren’t very durable. This led to situations where you would have to reapply the TIM regularly.

But Sony has obviously solved these engineering complications.

“We have spent over two years preparing the adoption of this liquid metal cooling mechanism,” Ootori said. “Various conceivable tests have been conducted during its adoption process.”

Earlier this year, Sony patented an insulating sheet that basically acts as a corral for the liquid metal. This is likely key to dealing with the conductivity and shifting issues.

Sony also isn’t the only company doing this. Asus is shipping its first laptop with a liquid-metal TIM this year. And that likely speaks to advances in the durability of the alloy.

So this means PS5 will run as cool as an ice cube, right? Not really

This solution is an impressive feat of engineering, but don’t think that means your PS5 will never get warm. The liquid metal can’t do anything about the laws of thermodynamics. All it can do is divert the excess energy in the PS5 out of the box and into your room.

Computers are basically just super-expensive space heaters, and that’s going to be true of the PS5 and Xbox Series X. What this does mean is that Sony has obviously spent a lot of time thinking about how moving that heat away from where it can mess up your games. And that’s what you really want from a console.

Sony shipping one of the first consumer products with a liquid metal TIM is worth noting. This required a serious dedication to innovation, and it’s one of the things that ensure the next generation should deliver.