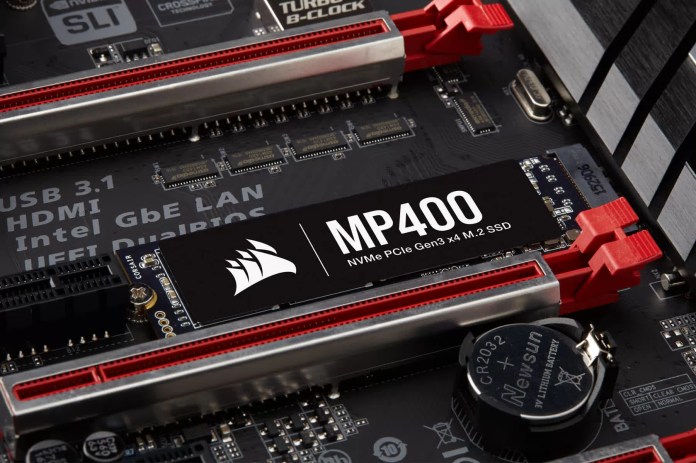 In a nutshell: It’s not bleeding edge storage, but Corsair’s new PCIe 3.0-based MP400 series should still deliver a noticeable performance boost to PCs running SATA SSDs/HDDs. The MP400 drives use high-density 3D QLC NAND memory, which trades high endurance levels for less power consumption and better value to reach more consumers. It also allows for a capacious 8TB SKU that Corsair is now selling for $1,379.99.

Corsair is targeting mid-tier PC gaming with its new MP400 series of m.2 NVMe PCIe 3.0 SSDs. Although its 3,480 MB/s reads and up to 3,000 MB/s writes should make for a pretty decent experience even on higher-end PCs, those with deep pockets and a penchant for assembling rigs out of the latest and greatest hardware are still likely to go for something PCIe 4.0-based like the Adata XPG Gammix S70 or WD’s recently released SN850 series.

All MP400 drives are currently listed for availability in 1-3 weeks on Corsair’s website, except the 8TB model that arrives a bit later, in 2-4 weeks. All models are backed by a 5-year official warranty and come with Corsair’s free SSD Toolbox software for updating firmware and setting up features like over-provisioning and secure erase.