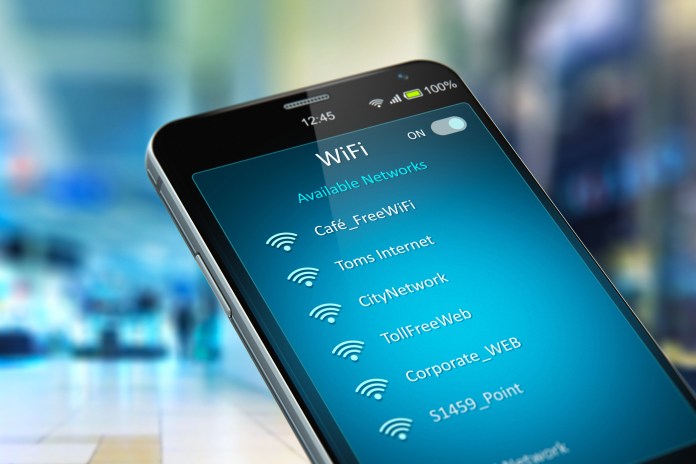 This article is part of the Technology Insight series, made possible with funding from Intel.

It’s easy to take for granted that our cell phones are always looking for nearby towers to keep calls and streaming services connected, even when we’re on the move. Wi-Fi, on the other hand, likes to remind us that it’s built differently. If you’ve ever tried pulling up a boarding pass at the airport, only to get stuck behind a captive portal, then you understand the inconsistent and often frustrating behavior of public Wi-Fi.

The OpenRoaming initiative, managed and promoted by the Wireless Broadband Alliance (WBA), aims to create a more cellular-like experience by authenticating your laptop or cell phone and joining participating Wi-Fi networks as you roam from one to the next. No more scrolling through lists of SSIDs. No more asking for passwords in conference halls. And no more disapproving looks from gate attendants.

The implications of widespread OpenRoaming adoption are clear. On a phone, you get higher bitrates and stronger signals indoors compared to cellular networks, plus data savings on metered plans and international roaming. Laptop users enjoy pervasive Wi-Fi connectivity where they didn’t have it before.

But OpenRoaming is more than just a convenience play for road warriors. According to the WBA, “For organizations and businesses…OpenRoaming provides the opportunity to create new commercial business models and innovative services with speed and simplicity.”

Let’s explore the inner workings of OpenRoaming, what the technology means to the future of Wi-Fi, and how it was recently deployed in one of Europe’s largest business centers.

OpenRoaming gets you on Wi-Fi for a seamless experience

The transition from Wi-Fi 5 (IEEE 802.11ac) to Wi-Fi 6 (802.11ax) brings significant enhancements to scalability, security, and performance. What more could we possibly want from our wireless networks? “…there are still a few things that we think need to be solved beyond efficiency in Wi-Fi,” said Jérôme Henry, principal engineer with Cisco’s office of the CTAO, at a tech event corresponding to the company’s Wi-Fi 6 roll-out. “One of them is easy onboarding.” 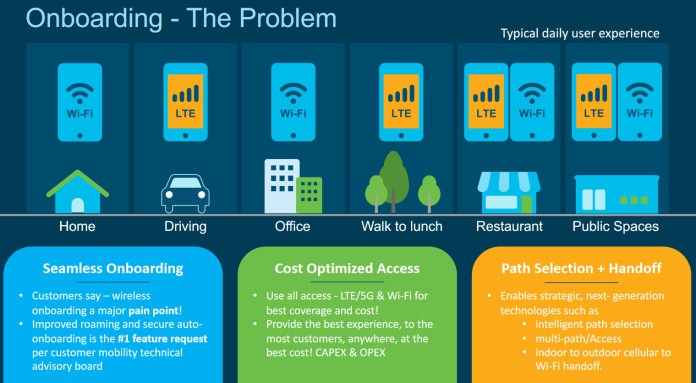 Above: We jump between Wi-Fi and cellular networks every day. With OpenRoaming, the handoff between those networks can be streamlined, yielding a better mobile experience.

That’s what OpenRoaming promises to address. “Relieving users from navigating to a portal, entering a password, subscribing to a service, or providing personal information every time they connect to a new Wi-Fi network would be a significant step forward from where we are today,” says Dr. Carlos Cordeiro, CTO of wireless connectivity at Intel and an IEEE fellow. “OpenRoaming enables the reuse of credentials to access Wi-Fi networks everywhere the user roams, whether the network is known to the user or not.” It’s meant to just work, like your cellular connection.

Now, in order for mobile devices to connect to cellular networks from Los Angeles to Lisbon, operators must negotiate international roaming agreements. Hundreds of these agreements address the technical and commercial relationships between carriers. But with 628 million public hotspots expected globally by 2023, it’s simply not practical to have lawyers work out agreements between everyone with Wi-Fi hardware.

Instead, OpenRoaming creates a cloud-based federation service that links trusted identity providers (IDPs), which maintain your credentials, and access providers, which operate Wi-Fi networks. OpenRoaming uses industry standards like Passpoint, RADIUS, EAP, and WBA Wireless Roaming Intermediary eXchange (WRIX) to automatically authenticate your mobile device and create a secure connection. The credentials you use might come from a device (such as your phone’s Samsung ID), a service provider (for instance, Verizon), or an online platform like LinkedIn. Access to the Wi-Fi network might be granted by your company’s IT department, a Marriott hotel, or an airport. Whatever the combination, both sides define policies that determine the services available to you. 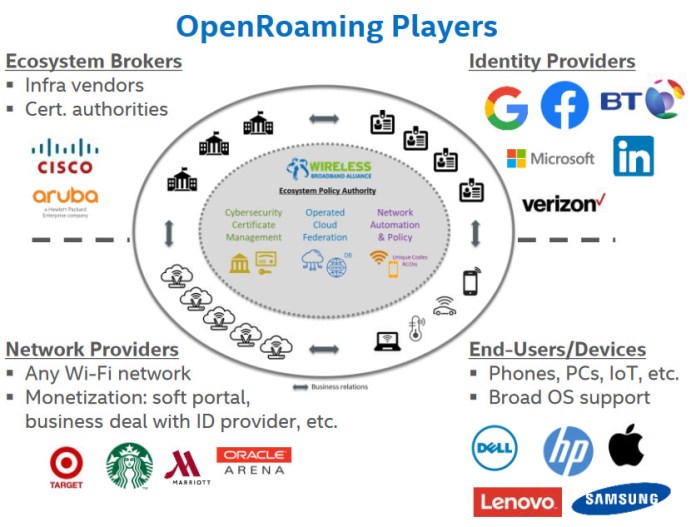 Above: As OpenRoaming gains momentum with identity providers, access providers, and device manufacturers, the initiative’s benefits will become more prevalent.

Access providers can choose the credentials they’re willing to accept. At the same time, IDPs are able to specify which access providers their credentials are valid for. So, for example, an enterprise could onboard employees carrying IT-issued notebooks with one level of access, while guests get routed to another network through the same SSID. Or a retailer could authenticate members of a loyalty program on its network, while simultaneously preventing those credentials from being accessed by a competitor.

What makes OpenRoaming so attractive?

Aside from the convenience of deftly moving between hotspots with uninterrupted service, OpenRoaming plays a starring role in a future where convergence between Wi-Fi and cellular drives lower-latency connections in dense environments. You want elegant handoffs between those heterogeneous networks, preserving their strengths whether you’re indoors or outside. When your device has the technology it needs to get onto both networks with similar agility, they can be used in a complementary manner. Apple already does this whenever possible to get better reliability from Siri.

Matt McPherson, wireless CTO at Cisco, discussed the interplay between persistent Wi-Fi and cellular links at Mobility Field Day 4 late last year. “If you’re connected to both paths simultaneously, then what you can do is you can pull the assurance analytics from those paths. And as LTE gets weak, Wi-Fi gets strong, and you hand off that session without ever breaking the connection because they’re both connected.”

Prior to multi-path transport, it might have taken six or more seconds to pass a session between LTE and Wi-Fi. That’s just long enough for whoever’s on the other end to give up and end the call. With multi-path, the transfer can happen seamlessly. But only if you connected to the Wi-Fi network on your way in the airport, hotel lobby, or office building. OpenRoaming will be what gets that path up and running without getting stuck behind a log-in page, or worse, a locked network.

Now, that’s not to say OpenRoaming is synonymous with free-for-all access. In many verticals, it makes perfect sense to provide customers with unfettered Wi-Fi. However, OpenRoaming supports billed relationships as well, giving businesses the freedom to choose how they bring clients onto their networks and whether they want to offer tiered services.

Why do I want to participate in OpenRoaming?

More frequent utilization of multi-path is one example of how OpenRoaming will prove its worth to end users in a heterogeneous world of high-speed cellular and Wi-Fi connectivity. But the technology will also create new opportunities for organizations enabling OpenRoaming on their networks.

For instance, if you’re a retail store, OpenRoaming’s frictionless Wi-Fi access and secure authentication lends itself to a higher attach rate. That’s a larger captive audience with your app installed, eager to browse sales pushed to their phones when they walk in the door.

OpenRoaming is a game-changer for IDPs, too. They no longer need to impede Wi-Fi access with a cumbersome portal, nor do they need to require a social media or loyalty program log-in. With an agreed-upon policy in place, IDPs and access providers can get those users authenticated before they even realize they’re on the network. There’s also an opportunity to gather anonymized analytics data to optimize the customer experience.

At the end of the day, whether you’re an access provider, an identity provider, or an ecosystem broker, OpenRoaming has something to offer. “…there is significant value for everyone,” says Intel’s Cordeiro. “Enterprise IT departments can more easily manage guest Wi-Fi networks that support OpenRoaming. Device vendors and businesses can ensure their devices seamlessly and securely connect to OpenRoaming-capable Wi-Fi networks. Identity providers can get valuable information about users. And infrastructure vendors can offer value-added services to their customers. OpenRoaming significantly lowers or removes the barriers for users to get their devices connected, so that businesses can focus on delivering value-added services.”

Frictionless Wi-Fi, available in the wild

OpenRoaming made its debut at the 2019 Mobile World Congress (MWC) trade show in Barcelona, Spain. Attendees with certain Samsung phones were able to jump right onto MWC’s network for a seamless experience across the show floor.

The local airport and train stations participated in the pilot program as well. Even though the different organizations used their own access providers, they were all part of the same federation, so uninterrupted Wi-Fi access continued as those Samsung phones roamed into range. Apparently, most show-goers didn’t even realize OpenRoaming was taking care of onboarding in the background. They were simply on the Wi-Fi network, as if it were a cellular link. 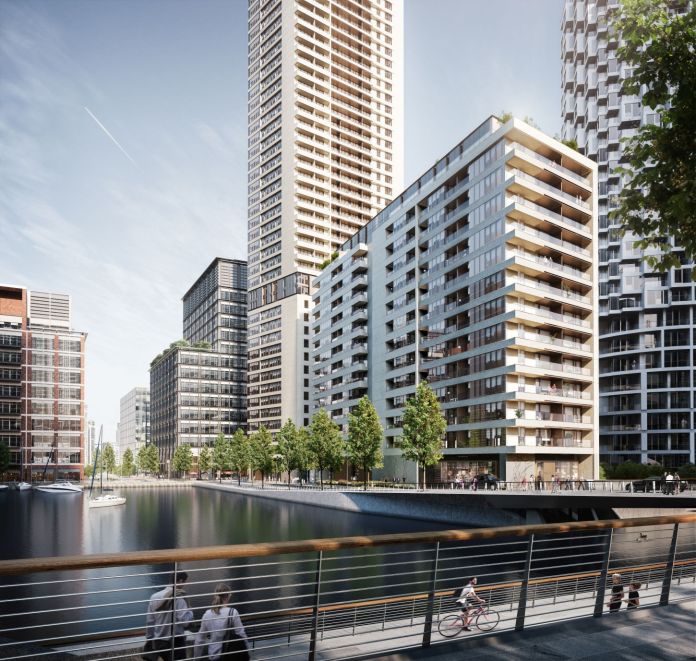 More recently, Cisco, Virgin Media, and the Canary Wharf Group announced the first commercial OpenRoaming deployment across five million square feet of mixed-use development at Wood Wharf in London. The partnership covers more than 20,000 businesses with fast Wi-Fi 6 connectivity, while OpenRoaming makes it possible for residents to maintain a secure Wi-Fi connection across the district.

Now that the Wireless Broadband Alliance owns and manages OpenRoaming, the standard is primed for adoption by an even more diverse federation of participants. According to the WBA, industry leaders such as Boingo Wireless, Cisco, GlobalReach Technology, Intel, and Korea Telekom have already pledged support. Dr. Derek Peterson, CTO at Boingo, sums it up best. “With the support of the WBA, interoperable roaming will go further and fuel new opportunities for the 5G era.”