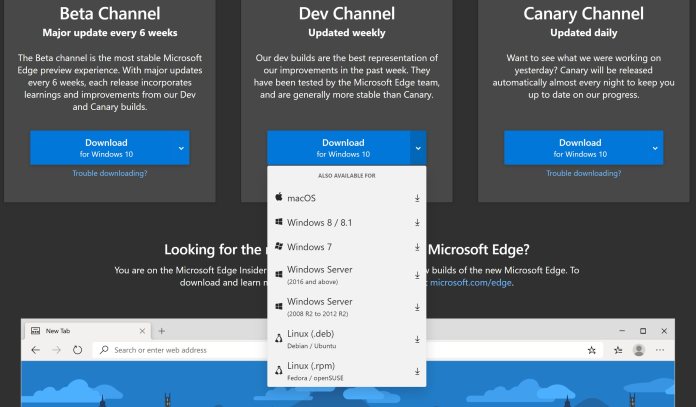 Microsoft has just announced that Microsoft Edge of Linux is available for download in the Dev channel, thus allowing users on the platform to finally try out the software giant’s Chromium-based browser.

“With this release, Microsoft Edge is now available for all major desktop and mobile platforms. We’re particularly excited to offer web developers the same consistent and powerful web platform and developer tools as on macOS or Windows, so you can build and test in your preferred environment and be confident in the experience your customers will have on other devices. For security researchers, we’re now also accepting submissions for the Microsoft Edge Bounty Program on Linux,” Microsoft explains.

The first preview builds of Microsoft Edge for Linux can be installed on Ubuntu, Debian, Fedora, and OpenSuSE. Microsoft says that its Dev builds aimed at Linux would be updated according to the company’s typical calendar, which means that new versions will be released every week.

As part of Microsoft’s release strategy, the Canary branch is refreshed every day, while the Dev channel receives updates on a weekly basis. Beta and stable builds are updated every six weeks.

“There are two ways to get started with Microsoft Edge on Linux. The simplest approach is to download and install a .deb or .rpm package directly from the Microsoft Edge Insider site – this will configure your system to receive future automatic updates. If you prefer, you can also install Microsoft Edge from Microsoft’s Linux Software Repository using your distribution’s standard package management tools,” Microsoft explains.

With the Linux release, Microsoft Edge is now available on all major operating systems. Thanks to the migration to Chromium, Edge can be installed on Windows 7, Windows 8, Windows 8.1, Windows 10, macOS, and Linux.