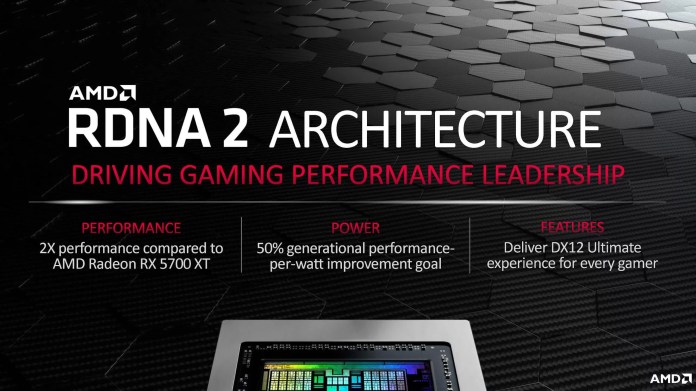 The big picture: AMD finally has some powerful GPUs to stack against Nvidia’s Ampere lineup in both 1440p and 4K gaming. The company says that when combined with its Zen 3 CPUs, these should deliver killer gaming performance at a price that will be hard for Nvidia to beat. And last but not least, AMD’s new RX 6900 XT will be as powerful as an Nvidia RTX 3090 while being less power hungry and less costly than the latter option.

After dropping the Ryzen 5000 series desktop processors earlier this month, AMD today revealed the Radeon RX 6000 series GPUs based on the RDNA 2 architecture, which we’ve all come to know as “Big Navi.” This is the same architecture that powers Microsoft’s Xbox Series X and Sony’s PlayStation 5.

AMD CEO Lisa Su said the company has tried to achieve the same generational leap in performance as it did when it went from GCN to RDNA. That means RDNA 2 should be able to deliver two times the performance of the RX 5700 XT (RDNA). In terms of efficiency, Su explained the new generation of GPUs affords a 50 percent improvement in performance per watt.

The company crammed 26.8 billion transistors into Big Navi chips, and employed a number of architectural improvements such as pervasive fine-grain clock gating, aggressive pipeline rebalancing, and redesigned data paths for efficient movement. With the Radeon 6000 series, AMD is also leveraging the same Infinity Cache it used in the Ryzen 5000 series CPUs to achieve more than two times the bandwidth of RDNA at 0.9x the power consumption.

The RX 6800 isn’t short on RAM like Nvidia’s offerings, packing a whopping 16 GB of GDDR6 memory. AMD is not just unleashing enthusiast-level cards to make a point, it’s trying to sway people away from Nvidia’s RTX 3000 series with great value. On that note, AMD didn’t show any direct comparisons with the RTX 3700, but we can be pretty sure the larger memory buffer on the RX 6800 will hold up well in 4K gaming for years to come. Nvidia’s could become a disadvantage given the current trend.

It’s worth noting that while these benchmarks do indicate the RX 6800 will be able to best the RTX 3700, it does so with a feature called Smart Access Memory that will only be activated on systems with a Ryzen 5000 series CPU. Still, the results show AMD taking the crown in pretty much all DirectX 12 games while Nvidia’s offering is still better when it comes to DirectX 11 titles.

The RX 6800 XT is no slouch against the Nvidia card at 4K in titles like Battlefield V, Borderlands 3, Call of Duty: Modern Warfare, and Forza Horizon 4, and it easily matches it in others like Doom Eternal, Gears of War 5, and Shadow of the Tomb Raider. But drop the resolution to 1440p and that difference is even clearer, especially in Battlefield V.

For a card that costs $50 less than the RTX 3080, the RX 6800 XT should make an attractive option for people looking to get similar performance to the Nvidia offering, but we’ll know for sure when we test the new card against a larger selection of games. Interestingly enough, AMD has only shown test results achieved without the Smart Access Memory feature enabled, which is useful for people wondering how the RX 6800 XT would perform if paired with something other than a Ryzen 5000 series CPU.

AMD’s response to Nvidia’s RTX 3090 comes in the form of the RX 6900 XT, a $999 card that runs at similar clock speeds as the RX 6800 XT and sports the same 16 GB of GDDR6 memory. The biggest difference is the number of compute units, which is bumped from 72 to 80 while sticking to the same total board power target of 300 watts, which is 50 watts less than the power-hungry RTX 3090.

The RX 6900 XT is being marketed as a 4K gaming card, and its 16 GB of memory should serve it well over the long term. Here AMD chose to go with less to keep the price down, while Nvidia went all in with 24 GB of faster GDDR6X memory. The latter markets the RTX 3090 as an 8K gaming powerhouse, but it also costs an eye-watering $1,499.

For the purposes of 4K gaming, AMD claims the RX 6900 XT with Smart Access Memory and Rage Mode activated will be able to get more than double the performance of an RX 5700 XT and hold its own against Nvidia’s much more expensive flagship thanks to architectural improvements such as the 128 MB Infinity Cache.

The RX 6000 series graphics cards don’t feature a dramatic board redesign when compared to their predecessors, as they occupy 2.5 slots and have a length of 267 mm. And unlike Nvidia’s newest offerings, they don’t come with a redesigned power connector, and instead feature two 8-pin connectors. AMD says they shouldn’t put any undue stress on systems equipped with enthusiast-grade, 650 to 750 watt power supplies.

On the software side, the RX 6000 series are based on the RDNA 2 architecture, which means they support Microsoft’s DirectX 12 Ultimate API, with features like ray tracing, tier 2 variable rate shading, mesh shaders, and sampler feedback. AMD is also expanding the FidelityFX suite of graphics libraries, and the company has added a one-click overclocking preset called Rage Mode in its Radeon Software. In the meantime, it will be working on adding DirectStorage support for faster game load times and higher quality textures.

AMD also has somewhat of an answer to Nvidia’s DLSS technology in the form of Super Resolution. Like DLSS, this should let users upscale game graphics to higher resolutions without a negligible sacrifice in image sharpness and clarity. The best part of Super Resolution is that AMD promises this will be an open-source project that should be easier to implement across a variety of games.

For those of you looking to get your hands on one of the new cards, AMD says the RX 6800 XT and RX 6800 will go on sale on November 18, while the 6900 XT will drop on December 8. These will likely be in short supply, and the company says it’s taken measures for retailers to prevent Big Navi scalpers from ruining the launch.