Alphabet’s high-flying Loon subsidiary is laying claim to a new flight duration record for its internet-beaming stratospheric balloons. The company said it has beaten its own record of 223 days, which it announced in July 2020, by nearly three months.

The announcement comes as myriad public and private entities seek new ways to expand internet coverage to the farthest reaches of the Earth. Constellations of micro-satellites from companies like Amazon and Elon Musk’s SpaceX are competing to bring connectivity to hard-to-reach places. Last week, Microsoft launched Azure Space to make its cloud unit “the platform and ecosystem of choice” in this burgeoning space race, much like a new business Amazon launched just a few months before. Bill Gates also recently led an $85.2 million investment in satellite antenna company Kymeta, which helps equip any vehicle or vessel with internet access.

While there has been a lot of activity in the low earth orbit (LOE) satellite realm of late, Loon balloons fly at a much lower altitude and can thus provide an LTE service directly to consumer devices. This bypasses any need for the costly terminals satellites much higher up rely on. And because Loon’s vehicles are located closer to Earth, the data transfer latency for internet-connected devices on the ground is reduced.

Google parent company Alphabet spun Loon out as an independent entity back in 2018, after developing it for five years as a “moonshot” project. Loon balloons travel in the stratosphere at an average of 20km above the Earth, where the varying conditions affect the direction and speed of the balloons. To counter this, Loon uses algorithms and predictive models to move the balloons up and down until they find a favorable wind current and helps them continue moving in their intended direction while avoiding restricted zones. This enables Loon to provide mobile network operators with expanded LTE coverage, serving remote areas and disaster zones where ground infrastructure has been damaged.

As the balloons are wind-powered, they can stay in the sky for long periods of time. The onboard electronics, including two radio transceivers, are powered by solar panels and a rechargeable battery. 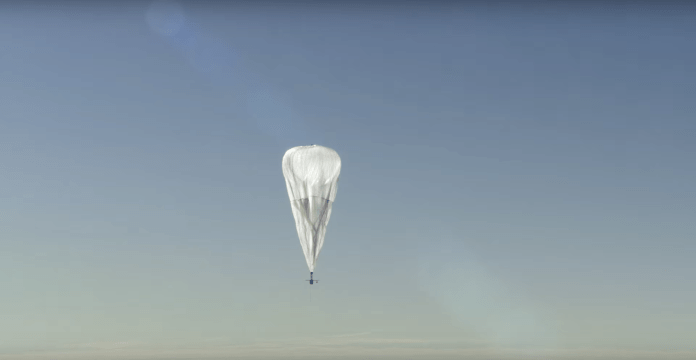 Above: An Alphabet Project Loon balloon.

Loon said it currently has a fleet of around 100 active balloons. One of its balloons launched from Puerto Rico in May 2019 and traveled to Peru, where it was tested as part of a pilot service for a three-month period. It then traveled about 215,000km around the globe, eventually landing in Baja, Mexico in March — 312 days after it first left the ground.

“This new duration record is exciting not because we flew one balloon for 312 days, but because it is a very visible indicator that our efforts to make all of our flight systems last longer is working,” Loon CTO Sal Candido wrote in a blog post.