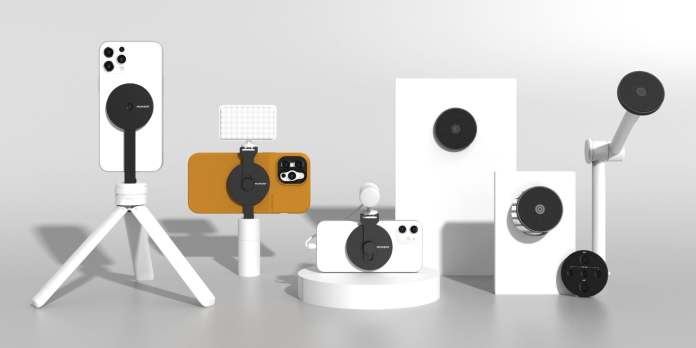 When Apple reintroduced MagSafe to the world during the iPhone 12 launch, everyone focused on its magnetic inductive charging capabilities — a step forward for fast and convenient phone refueling. But as it turns out, MagSafe isn’t just about wireless power: Moment is announcing MagSafe gear that will help iPhone 12s replace professional-class standalone cameras, using magnets to create frictionlessly simple stabilizing, lighting, and audio mounts for pro photographers and videographers.

In the past, Moment focused largely on enhancing the performance of smartphone lenses, creating cases, lenses, and an app that could double a device’s optical zoom range and enable cinema-quality anamorphic video recording. The company’s new MagSafe products are all about bridging the rest of the phone-to-DSLR gap, including a $30 Cold Shoe Mount that enables instant attachment of more powerful microphone or lighting accessories, a $50 Pro Tripod Mount with both a Cold Shoe and 1/4-inch tripod thread, and a $30 Multi Threaded Mount with three 1/4-inch and two 3/8-inch female threads that can be used with videographers’ magic arms, rig mounts, and ball heads.

Moment is also releasing $20 to $30 MagSafe wall, car, and basic tripod mounts that might superficially seem basic, but they’re all advancing the broader goal of replacing standalone photo and video cameras with rapidly improving smartphones. Spurred by major camera sensor and processor advancements, phones have continued to close the gap with traditional cameras over the past year, culminating in the iPhone 12 Pro including the first camera — phone or otherwise — with real-time Dolby Vision 4K HDR video recording abilities. In promoting the Pro models, Apple has positioned iPhones as compact replacements for larger firm equipment, increasing interest in mounting attachments that work anywhere.

While Moment is exploiting MagSafe’s effortless magnetic attachment and detachment abilities, it’s stopping short of offering anything with power functionality — for now. The Cold Shoe attachments let users add numerous third-party LED lighting attachments or microphones with their own batteries or Lightning connectivity, but don’t draw power from the iPhone itself. A recent Apple filing with the FCC establishes, however, that iPhone 12s are capable of sharing their own (albeit limited) batteries’ power using MagSafe connections, potentially opening the door to Hot Shoe style accessories in the future.

The new MagSafe-compatible mount lineup works with bare and MagSafe-encased iPhone 12 models, and Moment says all of its mounts use extra strong magnets to avoid accidental disconnects and drops. In addition to its standard $40 cases, which aren’t MagSafe-specific, Moment has also introduced a lineup of $50 MagSafe cases that use Apple’s standard circular attachment rings. All of the cases include a new “drop in lens mount” that will let the company’s prior M-series fisheye, zoom, macro, and anamorphic lenses attach to iPhone 12 models. Moment is taking preorders now and expects to begin shipping the new releases at various points in November and December, depending on the specific item.