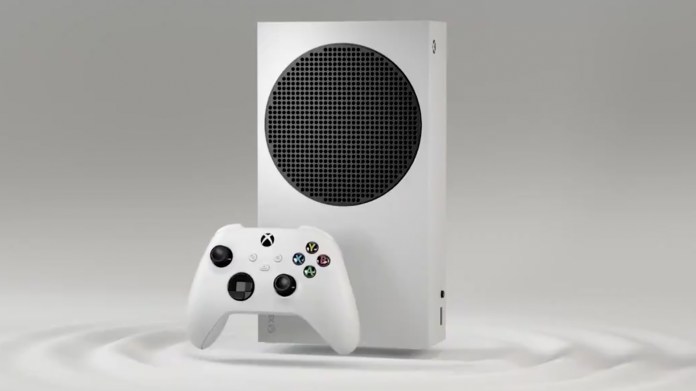 But what is the point of this less powerful console? Let’s talk that out.

For this review, I’m not going to go over the features one by one. Instead, I’ve posed a series of questions about the Series S that I’m going to answer from my time with the console. My goal is to determine whether this more diminutive Xbox has a place in the next generation of gaming or not.

What is the purpose of the Xbox Series S?

With the Xbox Series S, Microsoft is betting that a lot of people who prioritize value over horsepower still want access to next-gen games. It’s like the iPhone SE or the Google Pixel 4a. These are $400 and $350 versions of phones that also have $600-to-$1,400 models. Maybe the more affordable phone is slightly slower, but it can still do pretty much everything the phones that cost twice as much can.

That’s what the Xbox Series S is. It’s a more affordable option that can still basically do everything its more expensive sibling is capable of. It has the same type of speedy storage (though less of it). It has the same CPU (though slightly downclocked). And it has the same RDNA 2 GPU architecture (though with fewer compute units). The idea is that this hardware should play the same games as the Xbox Series X but at 1440p at the most instead of 4K. Everything else should be the same — or at least that’s the pitch.

Does the purpose of the Xbox Series S line up with the needs of any potential customers?

So, we know what the Xbox Series S is, but that leads to a companion question: Does such a console have an audience? If we take Microsoft’s claims at face value, we have to ask if anyone is willing to give up 4K to save $200. My hunch is that you and I probably wouldn’t. I write about video games for a living. You are reading about console hardware. We’re probably going to spend the extra money to ensure we have the best.

But what about the young family that wants to get a console for games and as a media device? What about the kid that plays Roblox with their friends and now wants a way to keep playing with them when they move on to Xbox Game Pass games? How about your brother who likes games but loves having a reason to spend some time chatting with you each weekend in Call of Duty? Or what about the diehard PlayStation fan that wouldn’t mind having a cheaper way to check out the occasional Game Pass release?

For so many people, saving $200 on a cheaper alternative makes sense. That is, as long as all you’re giving up is the 4K.

Do you have to give up anything else?

It’s too early to know whether Series S is really just a lower-resolution Series X. That seems possible overall, but we’re already seeing exceptions. Devil May Cry 5: Special Edition on Xbox Series X has ray tracing, but the Series S version does not.

Backward compatibility is also not as nice on the Series S as the X. This system is running the Xbox One S versions of old games, which means you often don’t get performance options. Sekiro: Shadows Die Twice runs at 60 frames per second on Series X, but that’s because it has a performance option in its One X version. On Series S, you’re stuck at 30 frames per second because From Software locked the framerate on the One S version.

Does the system have enough storage space?

The other thing you have to give up is storage size. Series S comes with a 500GB SSD. That’s already half the size of the Series X. But Microsoft reserves a significant chunk of that drive for the operating system, which leaves you with only 364GB of usable space for games and apps.

I want to say that this isn’t such a tragedy for the Series S audience. But with Game Pass, people are trying more games. And that could lead to a lot of Series S owners having to shuffle their data around every time a new game comes out.

Why does it have a smaller storage drive when it doesn’t have a disc drive?

The Xbox Series S is digital-only. That means you cannot use physical media like a disc. That might seem backward because wouldn’t you need more storage space if you’re digital? But the answer is “no.” That’s not how gaming works anymore.

Starting with Xbox One and PlayStation 4, the consoles installed every game onto your storage device regardless of whether you bought it digitally or on a disc. Discs would still give you a local backup, but if that is something you are about, you also probably want the Xbox Series X.

Of course, this turns into more of a problem if you have poor internet. But then the Series S isn’t really for you, because it’s designed around internet-based services.

Are games smaller than they are on the Series X?

Games aren’t going to shrink on the Series S. At least, they haven’t so far. Most of the Optimized games I’ve looked at are the same size on Series X and Series S. I had hoped that the Series S version would take up less space due to using smaller textures, but if that’s the case, it’s not making a difference.

Although compression might get better, no one has found a way to make a 250GB Call of Duty installation take up only 100GB on your console yet.

But even if things aren’t improving, it doesn’t seem like they’re getting much worse. It’s still early, but I don’t expect every game to turn into a storage hog. Instead, expect average file sizes roughly equivalent to what we got through the end of the Xbox One and PS4 era.

How do games actually run on the Xbox Series S?

I’ve already answered what you have to give up with the Xbox Series S, but what are you getting out of its games?

Nothing is working with ray tracing yet, which may prove troublesome for the Series X, let alone the Series S. The only thing we know for sure is that Devil May Cry 5 won’t support it on the S. But if visual fidelity is your primary concern, you likely aren’t considering a Series S in the first place.

Is the Xbox Series S going to last?

It’s difficult to imagine the Xbox Series S lasting an entire console generation. I get that. And I’m split on how to answer this question for a number of reasons. I think the Series S likely could last four or five years without feeling too old. Even by 2025, developers shouldn’t need much more power to run a photorealistic game at 1080p. And since Series S is using a modern Ryzen CPU, it should easily keep pace.

Maybe ray tracing really is too much. Or perhaps developers will choose to cut other graphical features instead of spending time optimizing games for the S. It’s possible. But at worst, I only see that as an occasional problem. Most people will probably want the Series S for online multiplayer games or some cool new Game Pass release. Nearly all of those will run just fine on Microsoft’s $300 hardware.

Another thing to keep in mind, however, is Microsoft’s business model. You can pay the total upfront cost of the Xbox Series S if you want, but the company is also offering the system as part of its Xbox All Access subscription. For $25 per month for 24 months, you get a Series S (to own) and two years of Xbox Game Pass Ultimate. That’s a good deal if you’re willing to commit to Game Pass for that long.

But the bigger question is what happens two years from now? Maybe some big-name games start dropping that make those Xbox owners want to keep their Game Pass membership. But it’s also reasonable to think that Microsoft may quickly launch upgraded Xbox Series consoles to give people a reason to get back on their All Access treadmill. If that happens, the Series S could begin to feel crusty after only two years. But that would be by design.

What else should you know about Xbox Series S?

Like the Xbox Series X, the Series S is a really great media box. If you consume a lot of Netflix, Prime Video, or Apple TV+, these work on this console. And the experience of using such apps is speedy and smooth. If you’re used to accessing apps through a smart TV or an Xbox One or PlayStation 4, the Series S is a significant upgrade. That’s thanks to the SSD and powerful CPU.

If you view the Series S as a media box and console, it really flips the value proposition. An Apple TV is $150, and the Nvidia Shield is $200, but those aren’t full-blown gaming consoles. And the Series S has support for prized A/V standards like Dolby Atmos and Dolby Vision HDR. If you have a TV that kids (or guests — if that is ever okay again) regularly use, I’d consider a Series S as the all-encompassing entertainment solution. And I wouldn’t even miss the UHD Blu-Ray drive.

The Series S is also small enough that it should fit into any entertainment cabinet. And that size doesn’t come with any real drawbacks. It’s still just as quiet as the larger X. And I also like the visual design of the S, whether it’s standing or on its side. Unlike the X, it looks even better in a horizontal orientation, thanks to its low profile and the large circular venting grill on the top.

Should you get an Xbox Series S?

When are you reading this? If you’re checking out this review on launch day because gaming is one of your primary hobbies, you don’t need an Xbox Series S. Get an Xbox Series X for the “full-fat” experience.

If you’ve found yourself reading through this review after the fervor for new hardware has waned because you want an affordable way to play some Xbox games, the Series S is great for you. The reality is that it takes someone who’s really paying attention to see the differences between what the Series X and S offer. If you only play games occasionally, the Series S has plenty of power and performance at a more affordable price.

Xbox Series S launches November 10 for $300. Microsoft sent GamesBeat review units for the purpose of our coverage. We also received a $220 1TB Seagate Expansion Card with the Xbox Series X.