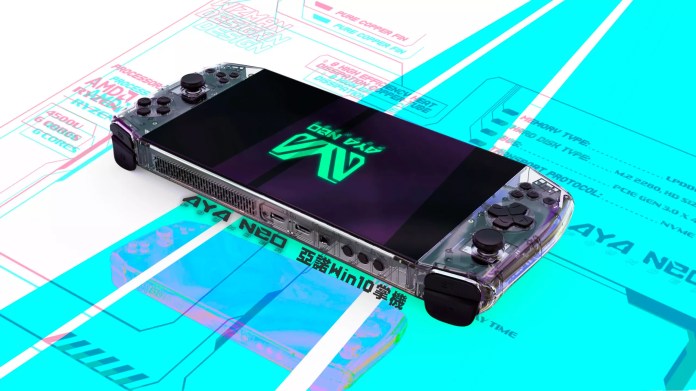 What just happened? While Nintendo’s baby is by far the most popular, there are more handheld game consoles out there than the Switch. Over in China, one particularly interesting example that’s just gone up for pre-order is the Aya Neo Founder Edition—a portable gaming machine powered by an AMD Ryzen 5 4500U APU (Renoir).

Aya was originally set to start shipping its handheld in October but was delayed by a month. It does bear a resemblance to the Nintendo Switch, though the body is transparent, and it includes the kind of RGB lighting found in many PCs.

It’s the inside where the Aya Neo Founder Edition differentiates itself from competitors. The Zen 2-based, 7nm Ryzen 5 4500U features six cores/six threads and boosts up to 4.0 GHz. Being an APU, it’s also equipped with six Vega Compute Units running up to 1,500 MHz for up to 1.1 TFLOPs of performance. There’s an impressive 16GB of LPDDR4X-4266 memory and the option of a 512GB or 1TB SSD (probably a Western Digital SN550 M.2 2280 SSD).

YouTube channel The Phawx in August showed Horizon Zero Dawn running at around 32 fps at 1280 x 800 on a pre-production unit, a figure would likely be higher now following optimizations and new drivers.

Currently, the Aya Neo Founder Edition is only available to pre-order in China for CNY 3,999 (~$603) or CNY 4,599 (~$694) for the 1 TB version. Aya is considering launching an Indiegogo campaign so the rest of the world can get hold of one.