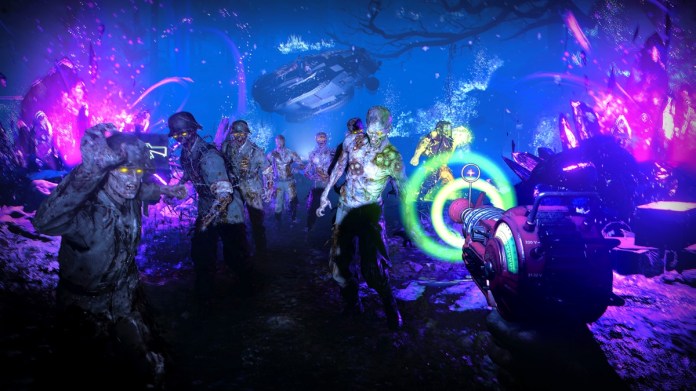 Activision’s Treyarch studio has once again delivered a Zombies mode in Call of Duty: Black Ops — Cold War. The newest game in the 17-year-old franchise comes out Friday.

In this mode, you can play with three other players cooperatively, fighting wave after wave of zombies that emerge from an old World War II Nazi bunker.

The new chapter in the Zombies narrative is called Into the Aether, and the heart of the story is dubbed Die Maschine (“the machine” in German). The story starts with a flashback from the 1980s to a scene at the end of World War II, when Russian soldiers uncover a radioactive Nazi bunker and find an experiment known as Projekt Endstation. The Russians accidentally set loose the zombies, and an international force tries to contain the outbreak.

You return to the site years later with mercifully modern weapons, including everything from high-powered shotguns that can take out multiple zombies to light machine guns (LMGs) that come straight from your multiplayer loadout for Cold War.

I played some rounds of Die Maschine Endless, where you just keep on going until the zombies finally close in on you. I had to be revived so many times it was embarrassing, but it was a difficult fight because my team chose to spread out over a wide distance and we weren’t talking to each other.

If you coordinate, you can get much better results. Not only is the bunker’s exterior pretty big, but you can also go down a couple of floors and eventually encounter some truly mysterious stuff. So there is plenty of space where you can get caught alone by a zombie horde, with no friends to help you.

The new thing about the game is exfiltration. After you reach round 10, you have the option of escaping through exfiltration every fifth round. A helicopter will show up, and if you can survive long enough your team can pull out of the infestation and live to fight another day. I almost got exfiltrated, but somebody or something blew up our helicopter and we all died.

I also played some two-player rounds of Onslaught, where you are placed in a multiplayer map but can only go into an area that is defined by a mysterious orb. The orb sets a smaller perimeter, where you must fend of the zombies, and it keeps moving around the map. Big zombie bosses start arriving, and I was delighted to earn a Sentry Turret that gunned them down automatically.

Lastly, the game has a top-down arcade version of Zombies, dubbed Dead Ops Arcade, where you just spray bullets everywhere in the hopes of holding off the zombies. It was cute, and I enjoyed it. Zombies veterans will get a kick out of it.

I’m not confident I’ll ever see the end of Zombies mode and find out how the story ends, but it is certainly stressful and entertaining to play.