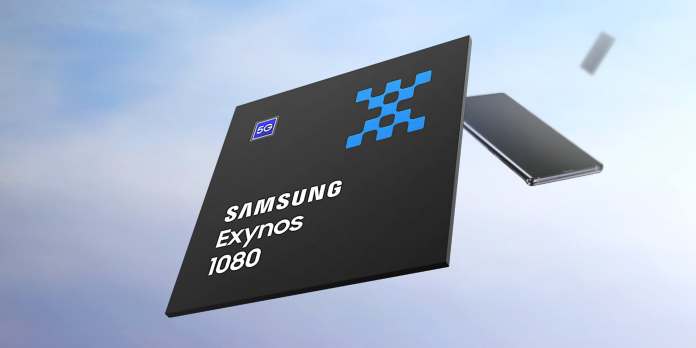 Up until recently, few major companies were manufacturing chips with the latest 5-nanometer fabrication process, which uses atomic-scale transistors to shrink CPUs, GPUs, and other components down to once unthinkably tiny sizes. Today, Samsung is joining the club with a 5-nanometer system on chip called Exynos 1080, tightly integrating powerful processing cores with a widely compatible sub-6GHz and millimeter wave 5G modem, as well as respectable support for other wireless standards.

While the separate components in Exynos 1080 might seem familiar, Samsung’s greatest hits-style packaging will make the chip competitive with top alternatives from 5G system-on-chip rivals Qualcomm and Huawei and steps above the latest chips from fellow 5G vendor MediaTek. Unlike Qualcomm, which prioritized millimeter wave-ready chips as soon as the 5G standard was complete, Samsung’s previous chips have been stuck with sub-6GHz modems that can’t fully take advantage of the highest-speed 5G networks that are already in the U.S., and coming soon to other countries. That is remedied in Exynos 1080.

Interestingly, Samsung isn’t only targeting its own future devices with Exynos 1080. The new chip was announced with up-and-coming Chinese smartphone maker Vivo as a strategic partner, suggesting Qualcomm’s upcoming sequel to the flagship-class Snapdragon 865 will have some actual competition. Moreover, because the Exynos 1080 now has all the 5G capabilities needed to service users in the United States and other markets, there’s a possibility that the chip could power future Samsung U.S. smartphones and tablets, which have often swapped Exynos chips for Snapdragon processors and modems to enable global cellular network compatibility.

The hitch is that Exynos 1080’s performance isn’t universally amazing. For instance, the new modem tops out at 3.67Gbps millimeter wave download speeds, roughly half what some 5G rivals have promised, while promising up to 5.1Gbps sub-6GHz downloads and 1.2Gbps LTE Advanced speeds. That’s enough to make the new chip plenty fast on pretty much any network it can connect with, but not the strongest millimeter wave or LTE performer around. Similarly, the new SoC includes an AI-focused neural processing unit capable of 5.7 TOPS, which is around half the peak speed promised by the latest Apple A- and M-series chips but still quite capable for a chip with an integrated 5G model. Samsung is also supporting the latest Bluetooth version, 5.2, and Wi-Fi 6 but says nothing about the newer Wi-Fi 6E standard.

Exynos 1080 does jump ahead in traditional CPU and GPU performance by using a small-medium-large CPU design with one 2.8GHz ARM Cortex-A78, three 2.6GHz Cortex-A78s, and four 2.0GHz Cortex-A55s, promising 50% faster single-core performance and nearly twice the multi-core performance of its prior flagship Exynos. It also ratchets up graphics performance with ARM’s Mali-G78 graphics processor, delivering an up to 2.3 times boost in speed, greater sustained performance over time, and support for 144Hz refresh rates. The imaging processor can support a single camera with up to 200-megapixel resolution, a dual 32-megapixel camera design, or up to six total camera sensors, as well as 4K HDR10+ video encoding at 60 frames per second.

No specific devices have been announced with the Exynos 1080 inside, but Vivo may well be the first to use the chip in a smartphone, and Samsung’s sequels to the Galaxy S20 family could do so as well — at the very least in some overseas markets, possibly globally. Rivals Qualcomm and MediaTek are expected to announce their own new flagship 5G SoCs later this year. These will likely offer overall performance that respectively exceeds and falls somewhat under the Exynos 1080’s levels, albeit at somewhat different device pricing tiers.