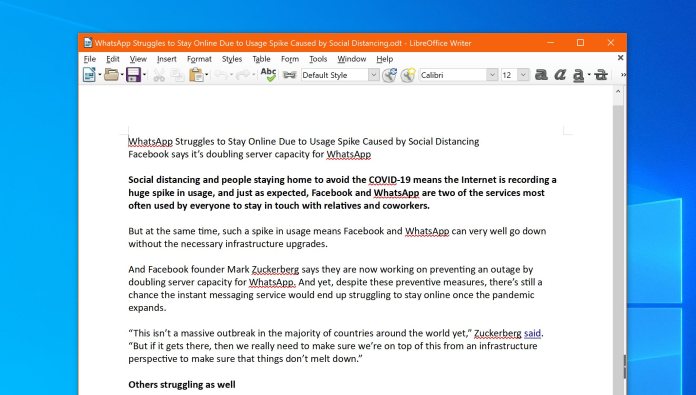 I’ve said it before and I’m going to say it again: LibreOffice is, by all means, the best alternative to Microsoft Office, and its freeware license makes it the go-to productivity suite not only for consumers but also for companies that are looking into ways to reduce licensing costs.

In the last few years, we’ve seen more and more companies, organizations, and state departments worldwide trying to embrace LibreOffice, just because they were trying to cut costs with the software they use. Some of them managed to stick with LibreOffice, others didn’t, but eventually, all of them agreed that the productivity suite developed by The Document Foundation is indeed a great alternative to Microsoft Office anyway.

And one of the reasons LibreOffice is so good is that TDF keeps rolling out more and more updates on a regular basis thus further refining the experience with the app but also resolving the possible bugs that users come across when running the app.

This week, the organization released LibreOffice 6.4.7, another version of the productivity suite that comes with additional improvements for the major 6.4 branch. In other words, this new update isn’t supposed to add new features, but to actually refine the experience overall to make everything run smoother.

As we know already, one of the things that set LibreOffice apart from the rest of the crowd is the compatibility with Microsoft Office documents. And I can’t stress enough how important this is, especially for those who make the switch from Microsoft Office to LibreOffice, as all documents should be loaded correctly, with no change made to the layout of files.

This new update, therefore, introduces additional improvements in this regard, according to The Document Foundation.

“The Document Foundation announces the availability of LibreOffice 6.4.7, the 7th and last minor release of the LibreOffice 6.4 family, targeted at users relying on the application for desktop productivity. LibreOffice 6.4.7 includes bug fixes and improvements to document compatibility and interoperability with software from other vendors,” the organization explains.

While LibreOffice has become the go-to productivity suite for users worldwide who don’t want to pay for Microsoft Office, few still remember that the push beyond Microsoft’s software in this part of the market was started by OpenOffice.

On the other hand, OpenOffice hasn’t received an update in a long time, and this is why The Document Foundation believes all users should be recommended to make the switch to LibreOffice.

“OpenOffice(.org) – the “father project” of LibreOffice – was a great office suite, and changed the world. It has a fascinating history, but since 2014, Apache OpenOffice (its current home) hasn’t had a single major release. That’s right – no significant new features or major updates have arrived in over six years. Very few minor releases have been made, and there have been issues with timely security updates too,” the organization said in an open letter to Apache OpenOffice.

“If Apache OpenOffice still wants to maintain its old 4.1 branch from 2014, sure, that’s important for legacy users. But the most responsible thing to do in 2020 is: help new users. Make them aware that there’s a much more modern, up-to-date, professionally supported suite, based on OpenOffice, with many extra features that people need. We appeal to Apache OpenOffice to do the right thing. Our goal should be to get powerful, up-to-date and well-maintained productivity tools into the hands of as many people as possible. Let’s work together on that!”

The new LibreOffice version is available today for Windows, Linux, and Mac.

Microsoft has just released a new Dev build of Microsoft Edge browser, and this time, there are two new features that are included. The new...
Read more
Linux

Raspberry Pi 400 Is Literally a Computer in a Keyboard

Raspberry Pi has just launched a brand-new device, and this time it comes in a rather unexpected form. The Raspberry Pi 400 is still a...
Read more