The Award-Winning Sharrow Propeller™ is Made in USA

Sharrow Marine announced today plans to build its global manufacturing headquarters for the award-wining Sharrow Propeller in Detroit, MI. Sharrow Marine LLC is a wholly owned subsidiary of Sharrow Engineering LLC – a nautical and aeronautical engineering company dedicated to the research and development of revolutionary high-performance propulsion technologies for the maritime and aeronautical industries. 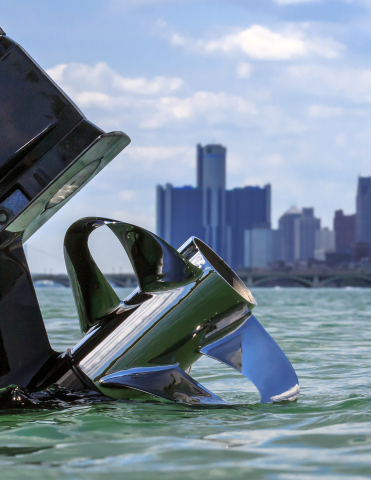 The SHARROW MX-1™ Propeller has garnered widespread attention for its innovative, new design that offers substantial improvements in fuel efficiency and performance rarely seen in the boating industry. Earlier this year, Sharrow Marine won one of the coveted Innovation Awards at the 2020 Miami International Boat Show.

Consumer excitement over the new SHARROW MX-1™ Propeller is rooted in the fact that the design offers a host of performance improvements including higher top speed, better handling, reduced vibrations, and a stronger propeller in general, and that it is 9-15% more efficient than the industry leading propeller designs.

“We are thrilled to be announcing our plans to build our new headquarters in Detroit,” said Greg Sharrow, a native Detroiter and CEO of Sharrow Marine. “Detroit will become the new home base for manufacturing, customer service, and engineering development,” says Sharrow. “We are excited to bring jobs to Detroit and to be bringing big propeller manufacturing back to the USA.”

The Sharrow Propeller™ is currently available for purchase directly from the Sharrow Marine online store: www.sharrowmarine.com/store

The Sharrow Propeller™ has undergone extensive third-party testing, including independent testing by BoatTEST.com. Advantages cited by BoatTEST.com and others of the new SHARROW PROPELLER™ MX-1R, MX-1S and MX-1G include:

Fifty-four U.S. and international patent applications have been filed with the U.S. Patent and Trademark Office (USPTO) and foreign countries to protect the intellectual property rights for the  Sharrow Propeller™. Already, 27 patents have been awarded in the U.S., Japan, Canada, Australia, New Zealand, Europe (14 countries), Taiwan, China, and South Korea  – with many other patent applications pending in countries around the globe.

Sharrow Marine LLC is a wholly owned subsidiary of Sharrow Engineering LLC – a nautical and aeronautical engineering company dedicated to the research and development of revolutionary high-performance propulsion technologies for the maritime and aeronautical industries. Sharrow Engineering LLC has assembled a team of the world’s top aeronautical, nautical, aerospace, and mechanical engineers to assist with the company’s core mission to reinvent the methodologies and technologies used for propulsion in the 21st century.

Hitman works because developer IO Interactive builds the games as predictable and rigid machines. And as players, we control the key to this machine...
Read more
PC News