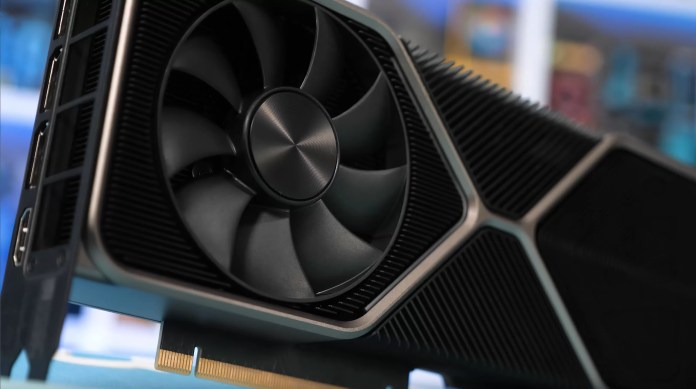 Nvidia came out swinging with the RTX 3000 series, but they’ve got a surprising left hook waiting in the wings. Asus has accidentally confirmed the existence of the RTX 3080 Ti, and revealed that it has 20 GB of memory. The new card targets the RX 6900 XT.

Asus’ support site listed these two unreleased GPUs, but has since been updated to remove them. One might be a factory overclocked model, and the other a reference clock model. Via Videocardz.

A 20 GB variant of the RTX 3080 has been rumored for months, as have similar upgrades down the stack: 16 GB RTX 3070 models, and 12 GB and 6 GB RTX 3060 models, are also anticipated. Nvidia’s Jeff Fisher, the senior VP of GeForce, is expected to announce them at a virtual event on January 12. Rumors suggest a February release.

On the performance spectrum, the Ti models will fall just above their vanilla counterparts. Increased memory will provide a few percentage points’ worth of improvement, more at higher resolutions, and the rumored increased clock speeds and core counts could round out a ~10% upgrade. Their prices could be similarly boosted in a worst-case scenario, but will more likely land just a hair above the current MSRPs. The vanilla models might also be discounted as a result.

But questions remain. If Nvidia is selling every card they can produce already, why do they need upgraded versions? (Does this mean they’re anticipating more stock?) If DLSS and ray tracing and their GPUs’ selling points, why aren’t they prioritising those? (Fine, low blow on my behalf…) But, most importantly, will AMD strike back?

TL;DR: The situation with the RTX 3000 graphics cards is dire. Not...
Read more
Hardware

TL;DR: The situation with the RTX 3000 graphics cards is dire. Not...
Read more

(Reuters) — The outgoing Trump administration said on Thursday it was issuing new rules that would allow manufacturers of...
Read more
Load more